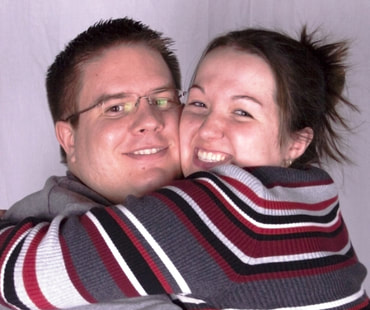 Chelsea and Steve met as co-workers at the Pizza Hut in Highland, IL.  Chelsea was a waitress and Steve was a pizza delivery driver, or as he put it a "Professional Food Caterer." Steve states he instantly knew she was the one for him. Unfortunately, Chelsea’s father did not agree. With a desire for Chelsea to focus on school and not date unknown older men, Chelsea’s father advised that she not pursue an interest in Steve. The thought was dropped from both parties and life went on.

Two years later, Chelsea reappeared at Pizza Hut as a waitress on the same day Steve was quitting Pizza Hut to pursue a career as a Network Administrator. The two exchanged numbers and neither called the other for 3 months. Out of random chance Steve decided to text Chelsea “Hello, how are things?” and the two began a relationship. Due to the restraints of Steve working a job that required 24 hour on-call availability and Chelsea being a full-time student / musician, the relationship did not extend beyond text messaging (500 text limit per month) and windows live chat messages for 4 months. On March 29, 2007, Chelsea and Steve finally went on their first date where they officially fell in love with each other and have been ever since.

Chelsea and Steve are very excited about their upcoming wedding on May 19, 2012 at the Pere Marquette Lodge and Conference Center in Grafton, IL. As a law student and an undergraduate student, Chelsea and Steve hope to get some much needed relaxation and time together away from school by taking a cruise to the Eastern Caribbean locations of Nassau, Bahamas; Charlotte Amalie, St. Thomas; and Philipsburg, St. Maarten. On this cruise the couple hopes to go on at least one shore excursion at each location, enjoy a couple’s massage, and take part in many activities aboard the ship. Chelsea and Steve would like to express deep gratitude to their friends and family that contribute to their exciting trip!