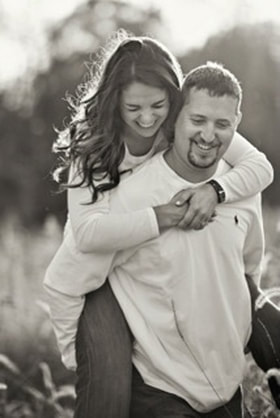 Meet The Bride
For those who don't know, I am a Special Education Teacher.  I absolutely love it!  It's not always easy, but it's definitely rewarding.  I received my Bachelors in Early Childhood Special Education from St. Louis University and my Masters in Education Administration from Lindenwood.

I've entertained the idea of being a "runner" off and on again for that past three years.  I am running another half marathon before our wedding, primarily because Clark laughed at me when I told him I wanted to do another one.  My nephew is definitely one of my Top 5 favorite people in the world.  I love to travel and look forward to traveling to Alaska for our honeymoon.

Meet The Groom
Clark's first name is actually Chris.  His friends, my friends and my family all know him as Clark.  I only refer to him as Chris if we're having a heart to heart or if I am talking to his mom.

Clark was really good at being a member of the Sigma Pi Fraternity in college.  He was so good, that he received an honorary Doctorate and returned home.  Clark works for the public works department in Collinsville - hence, us having to live within 10 miles of city hall.  He loves to hunt and fish.  He shares property with his parents in Metropolis, IL where he goes to hunt/relax every year.  Clark is also good at fixing/building "stuff."

Home Is Where The Heart Is...
The name Chris Clark was not an unfamiliar name to me.  He was actually my brother's friend, long before our first date.  However, we had never really met until about 3 years ago though.  It wasn't exactly love at first sight.  It was just another night out in Collinsville and Pete sister (that's my brother's nickname) came out with him.  Months went by and we continued to talk to one another when we saw each other out, become Facebook friends, etc.

If you're from Collinsville, you all know the Italian Fest (the 3rd weekend in September) is a holiday...no seriously, the school district even gets off for it.  A group of us met up and that was the beginning of the sparks flying.  After about a month or so of talking to one another, getting to know one another outside of the Friday night bar scene, we had our first date.   I knew he must like me, when he suggested going to dinner at Mosaic and not Applebee’s. There were those awkward moments where “the group” tried to figure out why Pete’s sister (Pete is Justin’s nickname) was invited by Clark.  And let’s not forget when Josh, one of the best men, performed his own stakeout in a parking lot and watched me leave with Clark.  From there as they say, “The rest is history.”