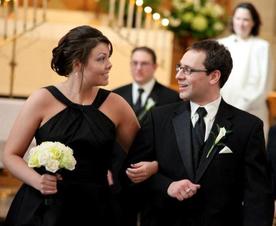 "Chris and I met one fateful day in spring of 2012. We were paired bridesmaid and groomsman at Lauren and John Aramini's wedding.  Lauren was one of my best friends in college, and John and Chris were close friends in college. Apparently, it was a set up! Lauren and John thought sparks would fly...they were totally right. We danced the night away at the wedding and the next day, we ended up exploring Chicago together. It was pretty surreal. At the end of this magical weekend, Chris flew back to Buffalo, NY and I drove back to Columbia, MO. We talked on the phone or through email  practically every day. I came out to Buffalo and he visited St. Louis. In the summer of 2012, Chris asked how I felt about him moving to St. Louis. I was thrilled because we both knew that we would not survive THAT long distance of a relationship and I was locked into staying in Columbia, MO for my Family Medicine residency. Some called it crazy, but we knew we wanted to keep what we had going strong. He moved to St. Louis on my birthday -- September 22 of 2012. Why St. Louis and not Columbia? Chris is an actor and director by trade, and Columbia has a lot less to offer in that department. He found a  great job working with adults with disabilities as well. We've faced challenges along the way, but I'd say things worked out pretty well.

In April of 2013, I was finishing my first year of residency and feeling pretty burned out. Chris had suggested back in January/February that we take a long weekend and get out of dodge. Clearly, this sounded awesome to me. We picked San Diego and the weekend of April 20th. We flew out and while we were in the airport in San Diego, I got a big surprise...Lauren and John were there! This was planned of course, but they left me out of the loop. Needless to say, I was shocked! Very long story short, Chris proposed to me in Balboa Park in San Diego and I was so flabbergasted, you could knock me over with a feather. After I was reassured by Lauren and John that it was really happening, I said yes.

We picked Hawaii for our honeymoon fairly early. I LOVE beaches, adventures and anything tropical. We both love to travel and agreed that this would feel far enough away without going international for our first big trip together. We are so thrilled to go -- Hawaii has so much to offer, and we are chomping at the bit to make some fantastic memories.

Since each of us has been living independently for several years, we have a lot of what we need as far as household goods. We thought the Honeymoon Registry would be a great way to allow people to offer expressions of congratulations that allow us to make lifelong and cherished memories during our first trip as husband and wife.

We look forward to seeing everyone at the wedding and are thrilled to be able to share our love with those who are special to us! We love you all!"