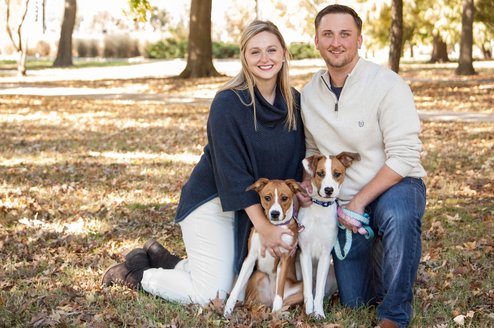 Tom & Melissa met in August 2014 at one of their favorite “hang-out spots” – Silvercreek Saloon in Belleville, IL. They met through a mutual friend later that night, and the rest was history. Although Melissa had just finished a sand volleyball game, and Tom was there to visit with one of his friends, neither of them expected to meet their soulmate/forever best friend that night.

After weeks of messaging through Facebook, Tom finally asked Melissa for her number since “it was easier to communicate via text message”. Not only was Melissa ecstatic about Tom ‘officially’ asking for her number, she was even more excited to see where the relationship would go.

Months of going on fun dates to Cardinals games, traveling to places such as Oklahoma, Arkansas, Arizona, California, and Nevada, eating out at steak restaurants (Melissa’s favorite), and trying fondue for the first time (Tom’s favorite) – both quickly realized they were in it together for the long haul. So, in March 2016 Tom decided to make things official by asking Melissa’s parents (yes – BOTH parents) for her hand in marriage. To this day, Tom says that was the most nerve-wracking moment of his life!

Shortly after, Tom took Melissa where it all began on their first date, Cunetto’s, an Italian restaurant on “The Hill” in St. Louis, MO. After a delicious meal, Tom proposed to Melissa and for once – completely surprised her, which totally caught her off guard. Sunday, March 13, 2016 will forever be a very special date for them. From that moment, Tom and Melissa took the next big step any couple would, adopted not only one, but TWO puppies! Harper (boy) and Bailey (girl) joined the family in May 2016. While everyone thought they were crazy for adopting TWO puppies AND planning a wedding at the same time, Tom and Melissa wouldn’t have had it any other way.

Tom and Melissa will marry on Saturday, September 30, 2017 at St. Catherine Laboure Catholic Church. Hoping to fulfill their love of traveling and relaxation, they will honeymoon at the Secrets Maroma Beach Resort in Riviera Maya, Mexico. While in Mexico they hope to swim with dolphins, be pampered with a couple’s massage, and go exploring in the near-by jungle! This will be the first trip outside of the United States for the couple, and they are very excited to see the world together. Tom and Melissa would like to express deep gratitude to their friends and family that contribute to their exciting trip as newlyweds!
​