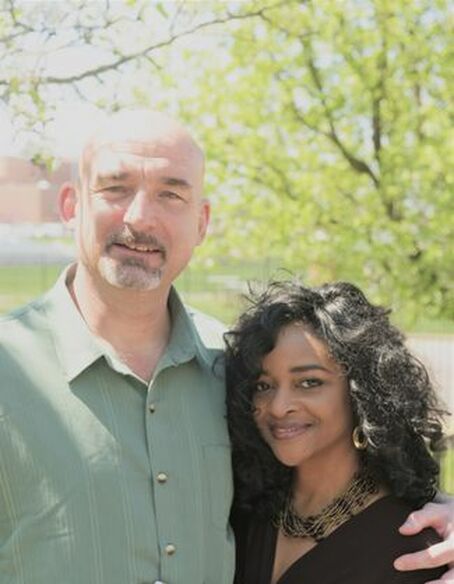 FROM THE BRIDE
Our first official date was over five years ago at Chili's Restaurant during a winter storm. I could tell he was nervous as he kept reaching into his pockets and pulling out nothing. To be honest, I was a little nervous too. He was easy to talk to and that was a good thing. We chatted for a while and I thought, hmmmm...there is potential here. THEN, he said we should take some time to think about whether this is something we both want to pursue. I was waiting for the usual end date question of "when can I see you again"! I figured that was his way of saying he was not interested. I left never expecting to hear from him again. Within the week, he reached out and asked for a second date. It was during this date that we had a very candid conversation about real life issues and our thoughts on the future.
I realized that he was painfully honest, which I could appreciate. He won my heart over by showing so much love and support for my family over the years, especially my mother. He contributed to her life being better. He is my keeper, my security, my friend and I would not trade him for the world.

FROM THE GROOM
I was very nervous during our first date. I had a lot going on at that time but I wanted to learn more about her. As we parted on the first date, I walked her to her car. When I saw that she was driving a very nice BMW, I could not let her see me drive off in my old car. Our second date was at a bowling alley and it was then that I realized she did not care what kind of car I drove. She is not that kind of person. I knew she was worth keeping when the bracelet she was wearing, flew off her wrist and crossed over two other bowling lanes. Rather than being embarrassed, we both laughed, and that sealed the deal for me. She has been a “rock” of wisdom, patience and understanding. She has a way of communicating with me that is compassionate but also straightforward. Our commitment to young people is shared. We have different occupations, different approaches but the same goals-impacting youth. I love her very much and I feel like the luckiest man in the world.
​
​Shante & Garth have selected the elegant Iberostar Rose Hall Beach Resort in Montego Bay, Jamaica as the setting for their November 2nd, 2019 wedding.

Brentwood Travel is honored to be assisting the bridal party .

Exclusive pricing has been arranged at the Iberostar Resort.
Contact Brentwood Travel's Group Travel Director Cathy Robinson
for more information or to book.