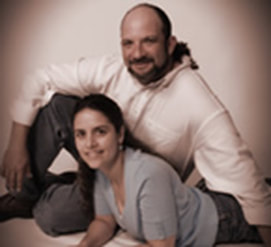 Susan and Robert met at his favorite venue to play music and her favorite place to dance! Robert is the percussionist for Dark Star Orchestra (DSO), and tours the U.S. and abroad. In 2000, DSO was playing at a festival at Nelson Ledges Quarry Park in Ohio, and on a warm, sunny afternoon Susan and Robert happened to meet. Their kinship was instantaneous, and they remained good friends for years. As their friendship grew, so did their feelings for each other, until one day, when the timing was just right...Susan shared her feelings with Robert, and a romance began. Since Susan lived in Pennsylvania, and Robert lived in St. Louis, their first year of dating was full of emails, phone calls, and road-trips to see each other (especially if his band was playing anywhere near Susan's home!).

Moving to St. Louis quickly ensued, and before long they were trekking across the country in a U-Haul. Last March, while on vacation in Europe, they made a short stop in Follonica, Italy to enjoy a spectacular view of the Mediterranean. It was on the beach there, just a short drive away from Susan's birthplace, that Robert proposed! Susan loves living in St. Louis, where she is an EDI Systems Administrator and, of course, a huge fan of Robert's band! The couple is getting married in St. Louis on May 2, 2009, and will Honeymoon in Maui and Kauai, Hawaii.